Have you ever wondered how to smoke shatter? What about what it is, in the first place? Like many people, you may have some questions and a lot of reservations.

While most marijuana enthusiasts are excited for this new way to experience cannabis, some have been turned off by how shatter is made (with butane) and its potency.

Before you make a final judgement on shatter and write it off completely, we’re here to explain what shatter is, and exactly how to smoke it in a safe manner.

Here’s all our answers to what is shatter and how to smoke it!

What is Shatter and is it Safe?

The appearance of shatter can range from a yellow, golden colour to a brown and dark brown colour, with a texture that’s hard and glass-like in appearance. Funnily enough, it shatters into tiny pieces if you drop it which is where it gets its name from.

There are few concerns people have when it comes to this golden extract. Being a derivative of butane hash oil (BHO), shatter is typically created using the petroleum-based, flammable and volatile substance, butane. Shatter is produced by “blasting” plant matter through three solvents including butane, C02 and isopropyl alcohol.

The other concern is its potency. Shatter can reach potency levels of close to 90 percent of THC and other cannabinoids, second only to THC distillates. Using butane itself doesn’t leave any residuals in the concentrates as many armchair scientists have claimed.

However, these concerns are valid, but if you purchase concentrates from credible distributors and dispensaries. Find yourself a friend that is very experienced in consuming shatter, who can show you the ropes and make sure you’re dosing correctly, then this experience might be for you.

We’re going to show you how to smoke shatter in a minute, but one question people ask often, is whether or not you can eat it!

Can You Eat Shatter?

Before we get into the ways of how to smoke shatter, let’s address whether we can eat shatter and still have a desirable experience.

The answer isn’t so straightforward. Technically you can cook shatter, which would theoretically decarb it. But raw, it wouldn’t do anything in terms of effects. So, yes, you can technically eat shatter raw, but you won’t get high.

If you’d like to ingest shatter, it’s probably best to put it through decarboxylation, a process that turns THC-A into an edible-friendly form of THC.

So, in other words, no heat means no high, which happens when you smoke it. With this said, let’s get into the ways of how to smoke shatter.

5 Ways of How to Smoke Shatter

1. Smoke Shatter with a Dab Rig

Shatter is typically consumed, like wax and honey oil, using a dab rig fitted with a titanium nail or quartz banger. The drawbacks are that you need a bit of equipment.

To start, get a handheld blowtorch and aim it at the nail so that it gets red-hot. Next, take your dabber with the shatter on its tip, touch the nail, and inhale slowly. You’re going to enjoy a huge hit which is why it’s such a popular method!

“What if I don’t have this so-called dab rig that I keep hearing about?”, you may be wondering.

No rig? No problem. There are multiple ways to smoke shatter where you don’t even need a rig.

A dab pen is such an easy, low-risk way to smoke shatter. You may have also heard it referred to as a wax pen, or concentrate vaporizer. This portable, easy-to-use dab pen heats the shatter up with atomizers and coils which you inhale through the mouthpiece.

Other than that, there’s not much more to smoking shatter with a dab pen other than inhalation!

What you should think about is how to buy a good quality dab pen. Select one that is lightweight and portable so you can carry it around comfortably, a pen that has a long battery life so you can enjoy sessions uninterrupted, and consider whether the pen is USB rechargeable or if you can charge it from a wall outlet.

Vape pens generally should only be used with liquid forms of THC, while dab pens should only be used for dabs like shatter because the structure of the pens are built for different materials. But you can technically vaporize your shatter if you want, and you might find a vaporizer to suit your needs.

To smoke shatter with a vaporizer, you inhale through the mouthpiece just like with a dab pen and the coil will heat the shatter into vapor. Pretty easy, huh?  Up next, another way to get around not having a dab rig.

4. Use a Bowl to Smoke Shatter

You can also smoke shatter by adding to your bong bowl, which is appealing for those who’ve been smoking flower for a while and want to try smoking shatter without buying a whole new rig.

Start by filling up your bowl half-way with weed and then take your dab and drop it onto the weed. Then pack the rest of the bowl and light it up.

5. Smoke Shatter in a Joint

If you’re looking for another option, then there’s always the joint. This is a good way to smoke as it’s easy to prepare. Start by rolling shatter into a long, thin, snake-like piece, then place it into the centre of the paper, and roll up the joint.

That’s the easy method – up next, a method we would NOT recommend, for reasons you’re about to learn.

How NOT to Smoke Shatter: Hot Knifing!

Don’t be freaked out but you’re going to need 2 heated knives, a straw and a stove.

Start by heating up the knives until extremely hot over a stove. Place the shatter between the 2 knives, sandwiching the blades together. You’ve got to be quick and as soon as the smoke starts to rise, grab your straw and inhale it deeply.

So, now which way are you going to use to smoke shatter?

Which Method Will You Use to Smoke Shatter?

Clearly with shatter, or any concentrate, you will get a stronger effect than when smoking regular weed.

Learning how to smoke shatter isn’t that hard, it just takes a bit of research, and guidance, to pick the right way for you. 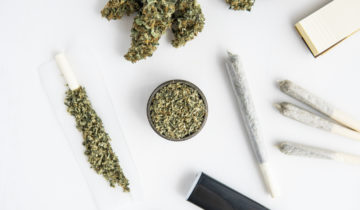 Is Weed Bad For You? – Demystifying The Science 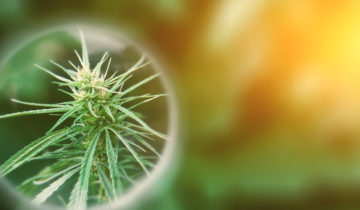 What is Delta-8 THC & How is it Different from THC?